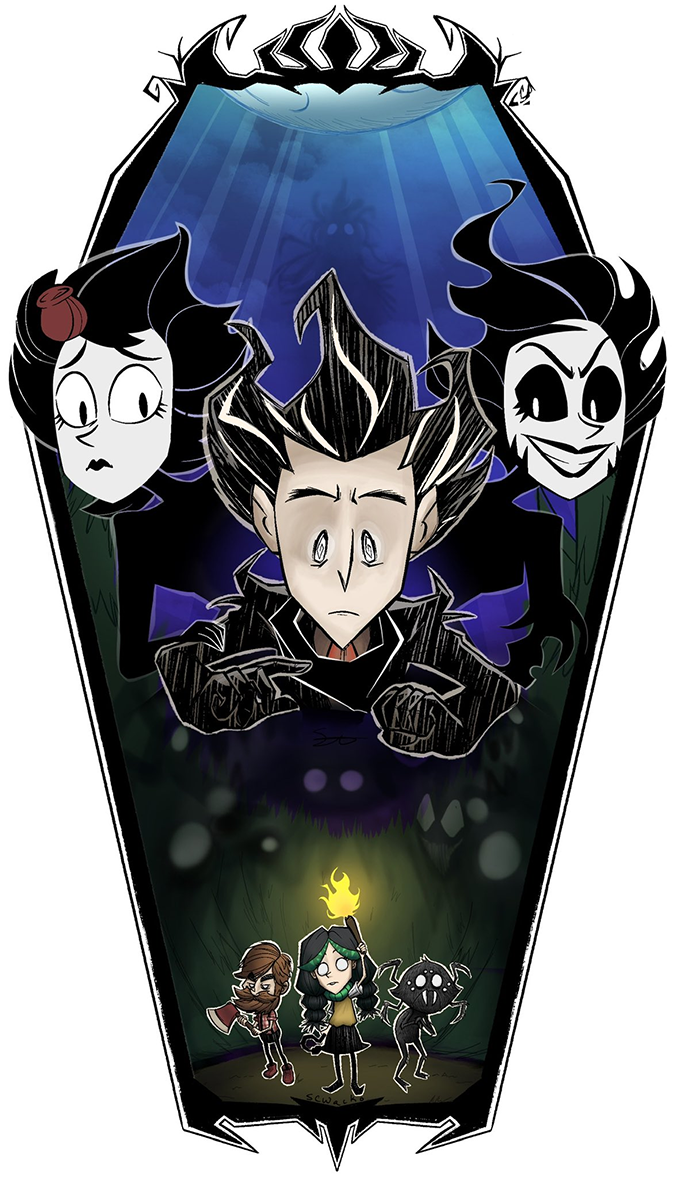 Q: Please introduce your work, and highlight your favorite aspects of the piece.

A:This artwork is called ‘Reigning Shadows’, and depicts Wilson pulling invisible strings over the Don't Starve and Dont Starve New Home characters while being controlled himself by shadowy figures, framed in a coffin-shaped canvas.

My favorite aspects of the piece mainly come from the background. The shadow monsters were made with the use of positive and negative space to define the shapes of many of the different beasts but at the same time show they originate from the same source. The moon casting rays down onto the world also adds a strong atmosphere to the piece. 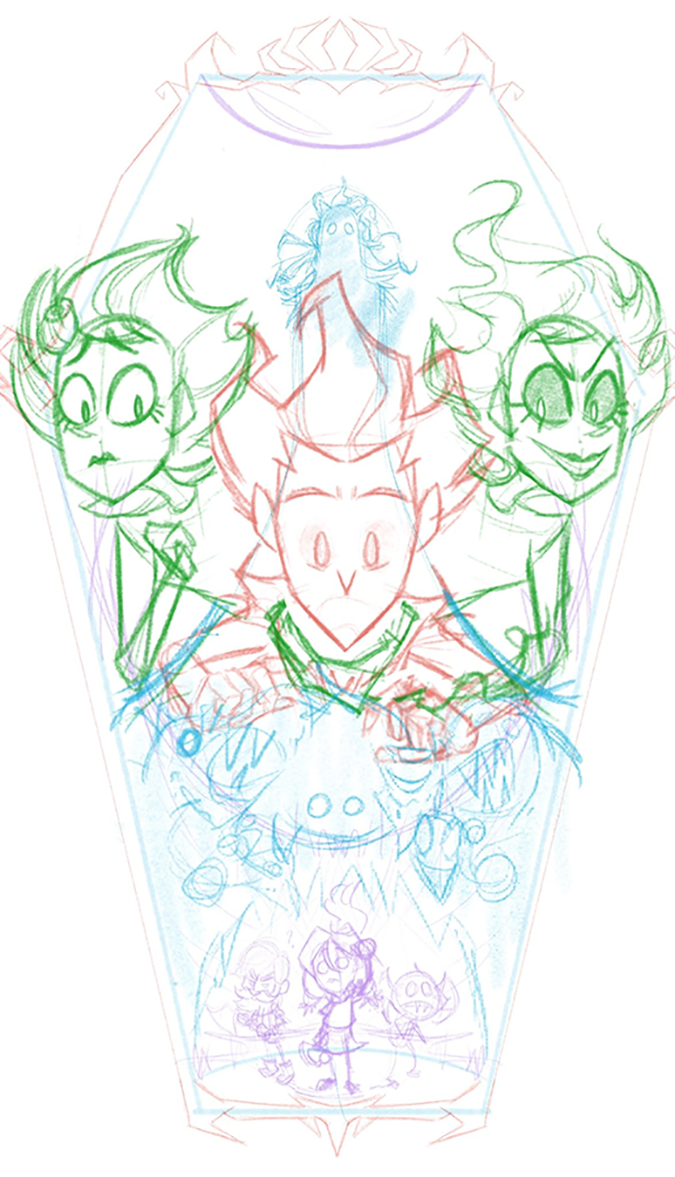 Q: How long did your DSNH art submission take you? Have you always been an artist?

A: The drawing took ~17 hours in total to complete the piece, drawing non stop after the work day ended for about 3 days.

Art has always been a passion of mine since a young age. My grandparents on my father’s side were professional painters who did book illustrations and highly detailed works of art. While I am a software developer by trade, art will always hold a strong place in my heart.

Q: Where does the inspiration behind your artwork come from?

A: The inspiration for this piece came from the first trailer for Don’t Starve New Home (DSNH), where Wilson is still sitting in the nightmare throne having some sort of influence on the world, but also under some sort of hypnotic influence himself unlike what was shown with Maxwell I believe in the main series. I wanted the characters staggered in a way that showed this power dynamic between the characters, with Charlie(s) on the top of the pyramid, the others like Maxwell and the shadow beasts in the middle, and the main don’t starve and DSNH cast the victims of it all on the bottom row.

While I don’t know what influence the moon may have over the DSNH world, there is a power struggle between the moon (or what represents it) and the shadows as of writing this in Don’t Starve Together. It was important to make sure, in this piece about power dynamics, that the moon was featured somehow. My brother suggested adding the rays of light from the moon which I fully embraced as it added a strong ambiance emitting from the moon.

The coffin frame was inspired by Kate-FoX and her series of drawings made in her coffin shaped notebook. This seemed like the perfect framing for a game where you are actively trying to avoid death from the shadows and insanity that surrounds you. The border follows the Don’t Starve style convention of framing.

Q: Can you talk about your experience with Don’t Starve, what do you like about the series?

A: The first Don’t Starve game I played was Don’t Starve Together. A friend of mine got the game for me as a gift for my birthday, and I got hooked on it almost instantly.

One of my favorite aspects of this game is that the world you inhabit is constantly changing and full of life. There is never a single solution to a problem you face, and utilizing the vast amount of resources in the world creates a different playthrough each time you start a new world. There is constantly stuff to explore and new things to try out that come from the seemingly endless permutations of possible scenarios that can play out. That’s the main reason why I keep coming back to the game.

Q: Do you have plans to create more Don’t Starve art? If so, what do you have in mind?

A: As long as I am a fan of the game, I will continue to make art for it. This holds true for all of my favorite games.

Currently, I have nothing official planned for my next piece. When new content such as lore or characters come out though, there is a strong chance it will be featured.

Q: In the future, what other contests would you like to see from Don’t Starve: Newhome?

A: How about a contest where players would design a new mob in the game? Whether this be a single entity like chester or a new tribe, there are a lot of possibilities here. Don’t Starve is home to a large variety of creatures ranging from frogs and spiders to mermen and pigmen, and it seems that Don’t Starve New Home is planning on expanding that cast more with a new racoon species I believe and other new creatures.

Other than new mobs, I don’t have anything off of the top of my head. The cooking special contest seemed like a very interesting idea, and the culinary submissions to it were very impressive and looked like a lot of fun to do. Contests like this with non traditional mediums that are still accessible to everyone are really innovative, and I hope to see more of that.

Q: Please include anything else you’d like us to know about your artwork submission and about you.

A: Thank you for selecting my artwork second place for this competition. I’m glad to have this opportunity to share the artwork with everyone and see their submissions as well.

Congratulations to Annalisa Amelia Visconti for winning first prize and her stellar use of composition, it has a very strong atmosphere and unique coloring style which added to the overall style very nicely. I really enjoyed all of the submissions such as the hot and cold willow on fire by KannaTC, the character William with his mysterious atmosphere by Cartoon Lunatic, and the buff beefalo-man by DanIIl as a few examples. It was fun to see all the different ways this challenge was interpreted.

This was a very fun contest and I hope to participate in more contests like this in the future!